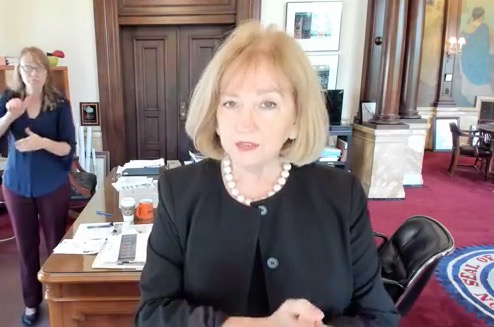 This is the second round of grants.

“We expect that this round will focus on those in hospitality who have been devasted by COVID-19, and when I say that, I mean restaurants, wedding venues, event planners…those who have been very severely impacted,” Krewson said.

Small business owners licensed in the city with less than 25 employees can apply beginning Monday after 10 a.m. once the website goes live.

The grants are five-thousand dollars per business.

“If we had more CARES Act money, we could do more, but we don’t at this time. Hopefully, every little bit helps,” Krewson said.

She then gave an update on the latest COVID-19 numbers in the city and answered questions about the newly announced restrictions taking effect in the city.

The latest data revealed 81 news cases compared to 104 the day before.

“That’s more than we would like, but it is certainly headed in the right direction,” Krewson said.

She reiterated that the city is seeing lower numbers than the surrounding counties.

“I attribute that to the good people of St. Louis who have taken this mask order very seriously,” Krewson said.

“The reason we have the 10-person limit for gatherings is to send a message to everyone that you really need to not get together with big groups of people,” Krewson said.

This order does not change the order that’s already in place.

“We are not going to shut down indoor dining in the city of St. Louis at this time. We don’t think that’s where the problem is. We are trying to put the restrictions where we believe the problem is,” Krewson said.

“Because we have no statewide guidance, every county executive or mayor is pretty much on their own and we try to coordinate as much as we can,” Krewson said.

She is, however, concerned about city residents who work in the county.

“I am worried about our residents who may work somewhere in the county and are being laid off or hours being reduced,” Krewson said.

Regarding the announcement Missouri Governor Mike Parson made Thursday changing state guidelines on quarantine, the mayor said the city will not change its policies.

When asked if another stay at home order is possible for the city, Krewson said, “ Of course it is possible, but that’s not what we’re seeing in the numbers or our contact tracing, but you can’t take anything off the table.”