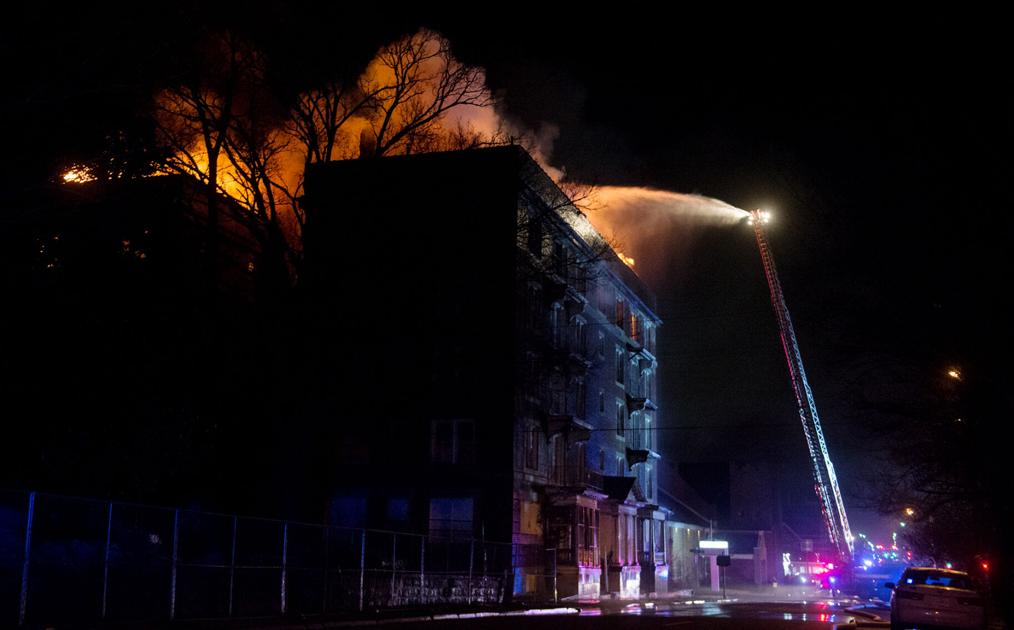 Fire broke out atop Joplin’s Olivia Apartments late Monday night — just days before what was expected to be a determination on a possible future for the building.

“It looked like the roof was pretty much engulfed in flames, which doesn’t bode well for the rest of the building,” said Bywater CEO J. David Dodson late Monday by phone. The St. Louis company was making plans for the restoration of the Olivia.

“If there is any path forward for it, we will try to find it,” he said.

The cause of the blaze was still unknown, but flames could be seen leaping from the roof and throughout the top floor. The extent of the damage also remained unknown late Monday.

“Maybe there is still some hope, I’m not giving up yet,” Dodson said from St. Louis.

The fire broke out just weeks after the Olivia was named one of Missouri’s 2020 Places in Peril by the Missouri Alliance for Historic Preservation.

Lori Haun, executive director of the Downtown Joplin Alliance, also said recently that her group considered the Olivia, a 114-year-old building at the corner of Fourth Street and Moffet Avenue, a priority for the Endangered Properties Program.

Bywater recently had expressed interest in the Olivia, and in October received from the Joplin City Council a resolution supporting a plan to develop up to 40 units for senior housing. The preliminary cost of that project was put at $12 million.

The company specializes in affordable housing, Dodson told the Globe. He also said the company had an option to purchase the Olivia from the current owner if it could secure financing.

The current owner of the property is Scott Tillman, of Tillman Redevelopment in Springfield.

“The combination of these credit sources is needed to save a building like that,” Dodson told the Globe earlier this month. “If we can get the financing from the Missouri Housing Development Commission, we think we may be able to make a go of it.”

Dodson said the application deadline for the tax credits from Missouri is the end of the October, and he had hoped to learn whether the company has been awarded the tax credits later this week or early next week. He said if the plan was successful, Bywater could have begun work next summer.

Built in 1906, the Olivia was constructed by Anton Bendelari for $150,000 and was named for his mother. When the building opened, the newspaper reported that “nothing more elegant, more stylish, more convenient has yet been erected in Joplin.”

According to the Missouri Alliance for Historic Preservation, the Olivia also had a reputation as the “handsomest apartment house in the West,” and each apartment had fireplaces, marble bathrooms with clawfoot tubs and French doors that opened onto private balconies. Two eateries were housed on the fifth floor — a more formal dining room and a casual “grill room.” Both were open to tenants as well as the public.

The Olivia has a large lobby with Ionic columns and coffered ceilings.

It was listed on the National Register of Historic Places in 2008, but two years earlier, it was declared uninhabitable by the city because it needed electrical and fire-code updates. As many as 20 tenants, some of whom had lived in the building for nearly half a century, had to vacate the property. It has been vacant since.

Dodson said in October the building appeared to be in sound structural condition. His company’s proposal included replacing the building’s major systems while preserving its historic character and “restoring it to its past prominence as an architectural gem and community anchor.”