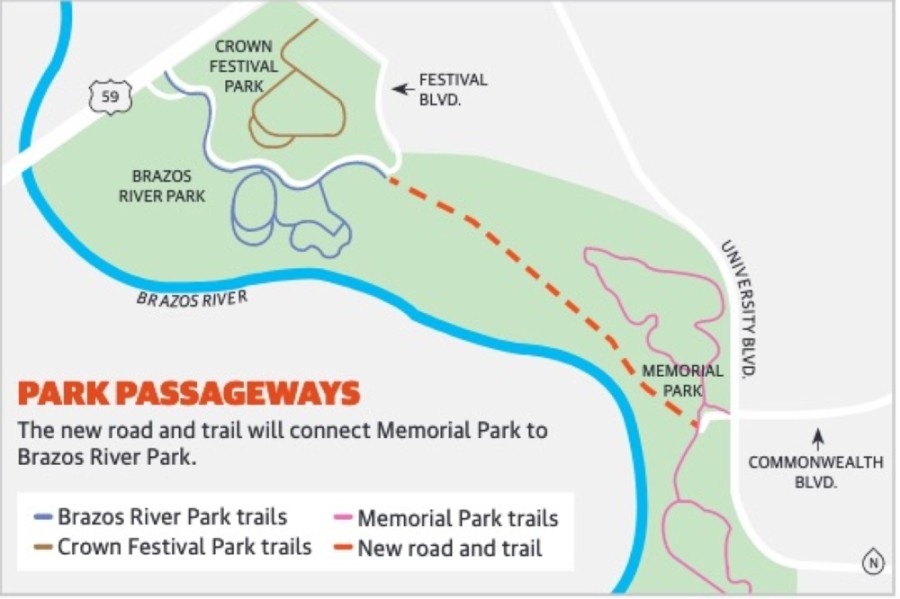 This map shows the new road and trail as well as the network of existing trails in the area. (Graphic by Chase Brooks/Community Impact Newspaper)

Work on the $2.2 million project is 75% complete and expected to be finished in early spring.

Once open, the road will provide accessibility to 420 acres of park land along the Brazos River, according to Sugar Land Communications Director Doug Adolph. The property on which the new road and trail are located was formerly part of the Central Unit Prison Farm and was deeded to the city from the state of Texas in the 1990s, Adolph said.

“The completion of the road and trail connection has been a long-term goal identified in the Brazos River Park Corridor Master Plan for providing full access to the whole 420-acre park site,” Adolph said in an email.

Funding for the two-lane concrete road and accompanying 8-foot concrete trail as well as landscaping, lighting, irrigation and drainage services were included in the city’s 2013 bond election.

Additionally, the new trail will connect existing trails at Brazos River Park and Crown Festival Park to those at Memorial Park, giving residents and visitors access to 9.5 miles of continuous trails in the area, Adolph said.